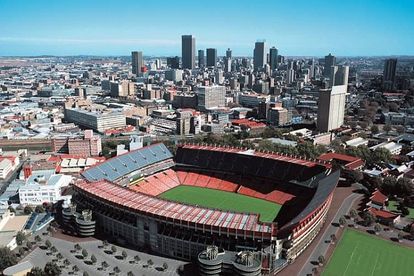 MAY 2004, An artist’s impression of the completed Ellis Park animation stadium for the 2010 Soccer World Cup to be held in Johannesburg, South Africa.
Seating Capacity: 64 150
Photo Credit:©Touchline Photo

MAY 2004, An artist’s impression of the completed Ellis Park animation stadium for the 2010 Soccer World Cup to be held in Johannesburg, South Africa.
Seating Capacity: 64 150
Photo Credit:©Touchline Photo

This was confirmed by new PSL boys Sekhukhune United who revealed that they will be playing some of their matches there this season.

And that’s because Makhulong Stadium, which they registered as their home stadium for the current campaign, has floodlights issues.

Sekhukhune said in a statement that the New Peter Mokaba Stadium will be their alternative venue, meaning they will play some of their home games in Polokwane when Ellis Park isn’t available.

The Ellis Park Stadium was previously home to Orlando Pirates whom their fans dubbed the ‘Park of Pain’ as the team turned it into a slaughterhouse.

But the PSL recently used the venue for some of its matches when football returned in a bio-bubble due to the Covid-19 pandemic in 2020.

Sekhukhune confirmed that their first encounter at the ‘new venue’ will be against Stellenbosch FC on Saturday, 11 September.

Sekhukhune United Football Club have temporarily moved some of their home games to Emirates Airline Park in Johannesburg from Makhulong Stadium due to flood light challenges at the latter.

As a result of this, Babina Noko will play some of their home games for the season, at Emirates Airline Park and New Peter Mokaba Stadium as an alternative.

Babina Noko will play their first fixture at Emirates Airline Park against Stellenbosch FC on Saturday, 11th of September 2021 at 17h00.

It is with great regret that due to matters beyond Sekhukhune United FC’s control, we have to move some of our home games from time to time.