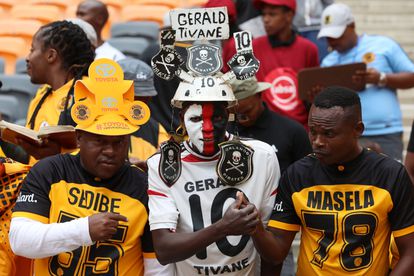 This year’s Carling Black Label Cup has undergone a radical change with four teams – rather than the usual two – in action on Saturday. Photo: Muzi Ntombela/BackpagePix

This year’s Carling Black Label Cup has undergone a radical change with four teams – rather than the usual two – in action on Saturday. Photo: Muzi Ntombela/BackpagePix

The 176th Soweto Derby is sure to stir up drama all over Mzansi as it has done all week, but that seems to be the only thing people can guarantee in a local grudge match.

ALSO READ: Chiefs vs Pirates: Five things to look out for in the 176th Soweto Derby

That being said, we’re in the mood to stick our neck out and make some bold predictions. It’s Friday after all. Here is resident football fanatic and analyst James Freemantle with his take.

There will be goals

The last eight Soweto Derby clashes have produced 21 goals, with those strikes arriving at a healthy average of 2.60 per game. That’s well above the league average of 2.00 per game. Take a punt at three or more goals this time around. High-scoring affairs haven’t necessarily been the order of the day in Africa’s biggest derby, but we’re eager to challenge that theory.

The home side will win

Keagan Dolly will score or assist

With Orlando Pirates midfield maestro Miguel Timm suspended, we suspect that there will be more space for Dolly in which to operate and he might have some joy. Cometh the man, cometh the hour, as they say.

There will also be an unlikely goal-scorer

Don’t be surprised to see a centre-back waltzing forward from a corner to find the back of the net tomorrow. Take your pick from Olisa Ndah, Innocent Maela, Nkosinathi Sibisi, Edmilson Dove and Zitha Kwinika. What are the odds of a goal-scorers getting on the score sheet? Stranger things have happened.

With none of the last eight Soweto Derby clashes ending in a draw, it feels as though a stalemate is well overdue. And since we’re backing goals, why not a 2-2 thriller?

There hasn’t been a Soweto Derby hat-trick in 26 years so perhaps that’s a bridge too far. But if there is one, what a wonderful surprise that would be. Enjoy the game!

Feel free to drag James in the comments if he gets all of these horribly wrong.