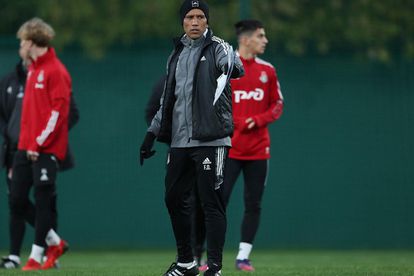 Fadlu Davids has responded to questions of whether he has had offers in the Premier Soccer League following his departure from Lokomotiv Moscow.

ALSO READ: ARTHUR ZWANE HAS HIS SAY ON SIYABONGA NGEZANA’S PERFORMANCE AGAINST STELLENBOSCH

The former Maritzburg United coach made a premature exit from the Russian club following the sacking of the club’s head coach Josef Zinnbauer who had appointed him as his assistant coach two weeks ago.

Prior to his European move, the 41-year-old coach was heavily linked with the Swallows coaching job.

ALSO READ: ARTHUR ZWANE ON WHAT BONFILS-CALEB BIMENYIMANA OFFERS AS A STRIKER

Musa Nyatama is currently in charge of the Birds on an interim basis with the club still in search for Dylan Kerr’s replacement.

Davids says he would embrace the opportunity of a head coach role in PSL, should it come his way.

FADLU DAVIDS ON OPPORTUNITIES IN SA

“At the moment, I want to give respect to the coaches that are currently coaching the [PSL] clubs,” Davids said in an interview with Sports Night Amplified with Andile on Metro FM.

“Any talks and stuff [are] not happening with me, it’s happening with my representatives and I told them as well, ‘don’t speak to me in the initial talks, talk tome once we are at an advance page’ we can then finilise things.

“But ready to take up any head coach position in South Africa but also open to exploring the rest of the world if any other opportunities come up.”

ALSO READ: JOSE RIVEIRO: I AM A SUPER OPTIMISTIC PERSON