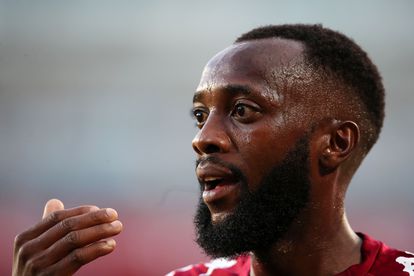 Zambian forward Justin Shonga is reportedly living on borrowed time at Sekhukhune United with suggestions management is growing frustrated at his off-field antics.

Key among his various transgressions is arriving at training under the influence of alcohol.

Three club sources have reportedly confirmed as much to FARPost.

“They’re contemplating on getting rid of him because of his behaviour. He has attended training under the influence of alcohol,” the source said.

Controversy has dogged the 25-year-old during his career.

He made headlines for the wrong reasons when he was suspended by former club Orlando Pirates after breaking the Biologically Safe Environment (BSE) protocol which was aimed at curbing the spread of Covid-19 infections among players and the technical team.

Shonga joined Sekhukhune United after leaving Egyptian side Ismaily in October 2021, just two months after Cape Town City FC released him following another brief and uneventful stint after joining them in January 2021 from Orlando Pirates.

It remains to be seen whether Shonga stays at Babina Noko beyond this season.

He has scored two goals and provided one assist in 10 DStv Premiership matches this season.

Sekhukhune United are currently 10th in the DStv Premiership standings.

They are safe from relegation, but frustratingly are likely to fall just short of qualifying for next season’s MTN8 having at one stage this season appeared well on course to do so.

Sekhukhune United’s final two matches of the season are home against Kaizer Chiefs (Saturday, 14 May) and away to Marumo Gallants (Saturday, 21 May).

Both matches are scheduled to kick off at 15:00.