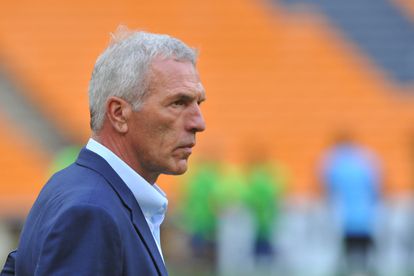 Kaizer Chiefs’ domestic woes continued on Saturday when they lost to Maritzburg United at the FNB Stadium in Johannesburg.

MUST READ | AS IT HAPPENED: KAIZER CHIEFS V MARITZBURG UNITED

With their defeat, Amakhosi extended their winless run to seven matches in the DStv Premiership after a 2-0 loss to Ernst Middendorp’s Team of Choice.

Middendorp of course coached Kaizer Chiefs up until the end of the 2019/20 season when he was let go in favour of Gavin Hunt.

Under Hunt, Chiefs have struggled mightily in the league and their latest setback sees them languishing in a lowly 14th place in the 16-team log.

With seven points from nine matches, Chiefs only have Chippa United and Black Leopards below them in the standings.

Hunt made two changes to his team following their historic win over Primeiro de Agosto in the CAF Champions League in Angola, as Daniel Cardoso and Anthony Akumu were recalled while striker Samir Nurkovic started from the bench once again.

Adding to Chiefs’ woes, Khama Billiat went down injured early in the second half and was replaced by Dumisani Zuma.

Amakhosi were punished in the 66th minute when Judas Moseamedi glanced a header past Amakhosi’s Nigerian goalkeeper Daniel Akpeyi after an inviting cross by substitute Malebogo Modise.

Things got worse for Hunt’s men in the 79th minute when Moseamedi doubled United’s lead after shrugging off Ramahlwe Mphahlele before guiding his strike into the far bottom corner.

Chiefs will next be in action on Wednesday, 13 January when they travel to Kings Park in Durban to play Benni McCarthy’s AmaZulu side.

Meanwhile, Maritzburg United, who moved up from the bottom of the standings to 12th place, will also next be in action against AmaZulu on Sunday, 17 January.s

‘Give them money’: Crowd boos Nathi Mthethwa at Banyana homecoming