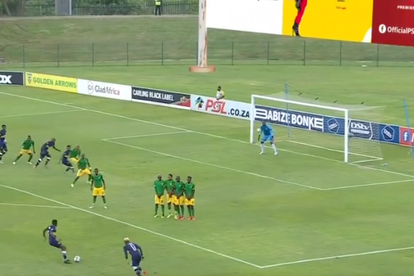 Cape Town City and exciting DStv Premiership star Khanyisa Mayo made us gush over a left-footed free-kick against Golden Arrows on Sunday.

WATCH THIS DSTV PREMIERSHIP GOAL OF THE MONTH CONTENDER

Just when Cape Town City were staring at a second consecutive 0-0 draw in Durban on Sunday after Kaizer Chiefs in the week, substitute Khanyisa Mayo demanded to take a late free-kick.

The SuperSport United academy graduate who was signed from Richards Bay this season, struck a perfect ‘banana’ past Arrows’ goalkeeper Nkosingiphile Gumede.

Check out the delivery below…

Meanwhile, the Gqeberha-born player and his teammates are now preparing to take on Orlando Pirates in Soweto on Wednesday 2 March.

BAROKA COACH THOBEJANE GETS ANGRY AT HIS MEN

Baroka FC’s Kgoloko Thobejane has blasted his players for the 4-0 loss to Sekhukhune United on Sunday.

Even a 2-0 defeat has become embarrassing these days since the gap between clubs and the quality of coaching has improved. A 4-0 slamming is therefore a big bang on the table.

In addition to the embarrassment of the result, Thobejane’s side have slid down the DStv Premiership log to 11th place. This is not a position to find yourself in at this time of the season. Read the full story here.