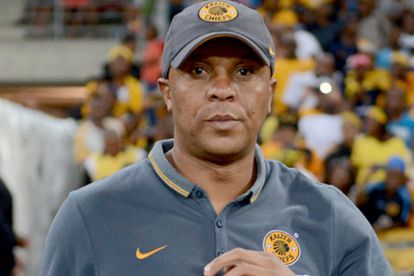 Kaizer Chiefs legend Doctor Khumalo has appealed to Arthur Zwane’s critics saying he should be afforded the same respect as the club’s previous coaches.

Zwane took over from Stuart Baxter and has lost three times in the five DStv Premiership matches Amakhosi have played this season.

The Soweto giants’ fans have been calling for some changes of personnel which none of those ‘Mangethe’ has done.

Subsequently, this has led to fans laying blame on Zwane when the club loses.

However, Khumalo believes Zwane knows Kaizer Chiefs from back-to-front and says he should be granted space to do his job.

ALSO READ: SIPHOSAKHE NTIYA-NTIYA ON HIS STAY AT KAIZER CHIEFS: ‘I WAS NOT SATISFIED’

“Give coach Arthur space to do his job; he deserves everyone’s respect like any other coach. He’s a Chiefs legend and knows the team inside out, so we need to support him as a Chiefs head coach,” Khumalo told Soccer Laduma.

“We gave all the other coaches that were there enough respect, so we have to do the same for him as well. It would be proper for people to do their own research and ask when things are not clear rather than jumping to conclusions for their personal agendas.

“When I talk about the big teams, I made it clear that there is no way a particular player can come in to be developed in the first team. He has to be a fully-fledged player or, at least, 80-90% ready to play for the senior team when he is promoted.”

Kaizer Chiefs now turn their focus to the MTN8 where they will take on Stellenbosch FC in the quarter-finals on Sunday, 28 August at the Danie Craven Stadium.