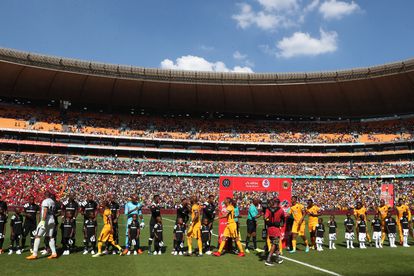 There will be a tweak to the usual pre-game pleasantries in the Premier Soccer League (PSL), with the Coronavirus outbreak set to change games as we know them.

The usual ritual of shaking hands before kick-off and after the final whistle will be temporarily done away with, with the League taking precaution against the further spread of the COVID-19.

This is after the first confirmed case of the virus in South Africa was announced on Thursday.

Health Minister Dr Zweli Mkhize confirmed yesterday that a man who had travelled from Italy had tested positive for the coronavirus.

The PSL has since sprung into action in an effort to do its bit in limiting transmission between players and match officials.

In a statement issued out on Friday, the League urged clubs in the Premiership and the Championship to limit interpersonal contact

“As the League, it is pertinent that we advise our Clubs’ management, players, technical staff, match officials, match commissioners, sponsors, PSL staff and other stakeholders the importance of the recent COVID-19 outbreak,” the statement reads.

“This advice is to be wary of controllable risk factors. With several teams in the Absa Premiership and GladAfrica Championship, including playing within the continent, we feel it is necessary for us to caution as a League.

“As indicated by the National Institute for Communicable Diseases, Department of Health and the World Health Organisation, the virus is droplet spread – so it is spread via droplets when coughing.”

The PSL recommended precautionary measures, urging that  “shaking of hands should be suspended to reduce spread risk”.

How the Coronavirus is impacting sport

With total infections nearing 100 000, the list of sports events affected by the virus is also growing.

In Switzerland, where confirmed cases have recently soared past 100, the country’s Premiership has suspended all of the coming weekend’s matches amid a ban of public gatherings enforced by the government.

The majority of coronavirus cases have been in China, and sports events in that country have too been affected, with the start of the Chinese Super League postponed.

Italy has also seen a spike in cases, with the death toll now well over 100. As a result, five Serie A matches will be played behind closed doors.

It is not only soccer fans who have been inconvenienced by the virus, with the European Tour cancelling April’s Maybank Championship in Malaysia and the following week’s China Open.

More notably, there is growing doubt over whether or not the upcoming 2020 Tokyo Olympic games will go on as planned.

Zimbabwean prophet murdered by a client using a brick