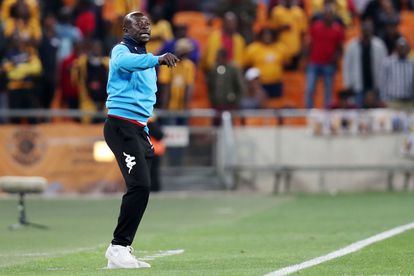 Arendse has been appointed to the head coach position for the remainder of the current PSL season, with Tembo let go with immediate effect.

SuperSport United and Head Coach Kaitano Tembo have reached a mutual agreement to part ways, with Assistant Coach Andre Arendse appointed to the position for the remainder of the current PSL season.

Tembo has served the club for 23 years, first as a player in 1999 before moving into a coaching role, serving as an assistant to Gavin Hunt, Stuart Baxter and Eric Tinkler and then taking over as Head Coach in 2018.

During his time as coach, Tembo reached two MTN8 Cup Finals, winning his maiden trophy against Highlands Park in 2019. Tembo has been a loyal servant of the club and was instrumental in drafting young players from the club’s academy system into the first team squad.

“Kaitano is the epitome of the dedicated club man,” said Stan Matthews, the club CEO. “Very few players transition into coaching at the same club where they played. We want to thank Kaitano for the many years that he served SuperSport United in various capacities.

It is never easy parting ways but as a true servant, Kaitano has always placed the interests of the club above that of individuals. We are grateful for the role he has played at the club both as a player and coach.”

Recently, according to FARPostZA, it was reported this month that they have it on good authority that SuperSport are in talks to possibly bring McCarthy to the club ahead of next season.

Tembo may have been aware of the speculation doing the rounds, but recently reiterated that it wasn’t worrying him.

“I’m not in control of that, all I have to do is to focus on the job at hand. That’s the only important thing to me,” Tembo said, as quoted by Sowetan Live.

“What is being said out there has nothing to do with me, and [yes] anything can happen in football, so it’s normal, it happens.

He added that he hasn’t even checked with the SuperSport bosses to discuss the McCarthy rumours.

“There’s no need to talk about it. It’s something that is coming from outside, so it’s all a speculation and we can’t always act whenever things are said about the club. I don’t think that’s important.

“What’s important for us is that we’ve got six games to go in the league and the Nedbank Cup to fight for.”