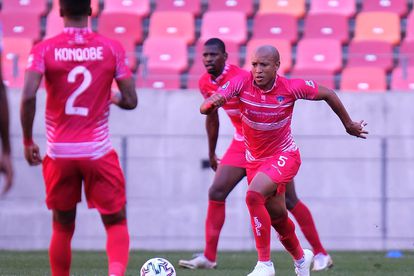 Chippa United made the best possible start to the promotion-relegation playoffs as they clinched victory over Richards Bay at the Nelson Mandela Bay Stadium. Photo: Twitter @ChippaUnitedFC

Chippa United made the best possible start to the promotion-relegation playoffs as they clinched victory over Richards Bay at the Nelson Mandela Bay Stadium. Photo: Twitter @ChippaUnitedFC

Chippa United moved to six points with a walkover in a match that was supposed to be between them and Royal AM at Chatsworth Stadium on Tuesday.

Royal AM had made it clear a day before the match that they would not pitch for the match pending the finalization of their application to appeal the ruling to crown Sekhukhune as GladAfrica Championship winners.

However, they made a U-turn hours before kick-off with confirmation that they were going to honour the fixture.

And this was after the PSL released a statement confirming that Royal AM had no leg to stand in their legal battle as their application for leave to appeal was dismissed on Friday.

Royal AM did pitch for the encounter and looked set to go ahead with the match until 10 minutes before kick-off when they were seen packing their bags and leaving the match venue.

Chippa United along with match officials appointed for the encounter made their way onto the pitch without Royal AM.

The match referee blew for kick-off, and shortly thereafter, he blew for full-time to confirm Chippa United as the winners of the match.

The Chilli Boys walked away with maximum points and three goals at the expense of Royal AM.

At this stage, Royal AM’s reasons for their last-minute change of mind are unknown but the legal battle between them and the PSL is set to continue.