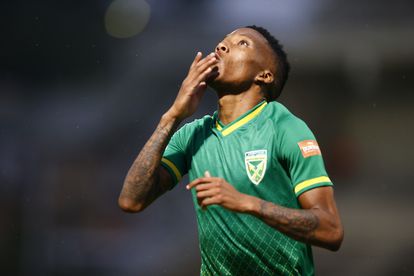 Could Pule Mmodi still be on the Chiefs’ ‘wanted list’? Photo: Backpage Pix

Could Pule Mmodi still be on the Chiefs’ ‘wanted list’? Photo: Backpage Pix

During the last pre-season, it was reported for quite some time that Bafana Bafana playmaker Pule Mmodi was one of the latest stars on Kaizer Chiefs’ target list, but eventually it emerged that he was set to stay with Golden Arrows as negotiations hit a stumbling block.

Back in September, it was reported by Soccer Laduma that Arrows were keen to extend the contract of Mmodi, who has less than nine months left on his contract. Such an extension would serve as a real show of intent and end any hopes Chiefs had of snapping up the 29-year-old in the next transfer window. Amakhosi are said to be monitoring the situation, though.

Interestingly, his agent Solomon Seobe has now told Goal.com that the player’s future will only be discussed during the upcoming January 2023 transfer window, clearly leaving the door open to new developments.

“The player has returned to Durban where he will resume training with his Arrows teammates,” Seobe told GOAL. “Everything is on hold at the moment until January. There are no contract renewal talks between us and Arrows. We are not in talks with any club at this present moment.”

As per edition 1294 of Soccer Laduma, Chiefs were not the only side to have expressed interest in Mmodi, with AmaZulu apparently also having made an enquiry about his services. However, that talk has quietened down recently.

READ | R11M MAN NJABULO BLOM TO STAY AT CHIEFS AFTER ALL?

A few months ago, Mmodi opened up on his emotions after the Chiefs move didn’t materialise.

Arrows co-coach Vusumuzi Vilakazi also previously shared his thoughts on the saga at the start of the new season.

LATEST: AS MANY AS 10 PLAYERS LINKED TO KAIZER CHIEFS!

READ | DOES THIS NEW SIGNING MAKE SENSE FOR PIRATES?