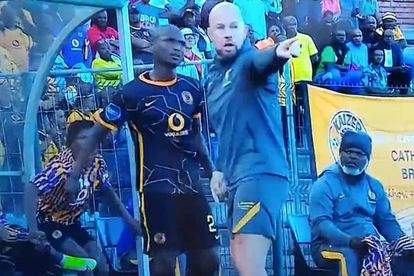 Ngcobo was clearly upset after he was substituted against Golden Arrows on Wednesday, with his mistake having led to a key goal for the opposition. In the footage (as you can see below), it shows the Amakhosi defender ignoring Arthur Zwane as he left the field, before goalkeeper coach Lee Baxter stepped in to seemingly question his behaviour.

BREAKING: ALL THE STATS, FACTS AND CELEBRATIONS FROM SUNDOWNS SUCCESS

Ngcobo reacted angrily to Baxter grabbing his shirt, but the incident appeared to divide opinion on social media, with some suggesting Ngcobo’s response was unacceptable. However, others felt it was a forgivable reaction to the disappointment of being substituted prematurely, while questioning why Baxter became involved.

Zwane, interestingly, has stated that Ngcobo could be forgiven after apologising.

“On Mr. Ngcobo’s situation, I think with Njabulo it was the heat of the moment,” Zwane said during Chiefs’ open media day on Thursday, as quoted by iDiski Times.

“I don’t think he did that intentionally. He was just very upset at himself because he made a mistake that ended up being a goal that we conceded that brought Golden Arrows back into the game.

“I learned from those mistakes and Njabulo is in a similar situation right now and he needs us, and he needs his teammates.

“He has apologised this morning because obviously he’s back to his senses right now. And you could even see after the game yesterday, he was remorseful and he realised the damage was bigger than what he thought.

“But look, like I said, we here not to judge. We are here as coaches to help our players to be better and he’s one of the best players we have, there’s no doubt about it.

“Going forward, we’ll try and help him fulfil his [potential]. When it comes to his career, we want to want to get the best out of him.”

You can watch the incident involving Ngcobo below:

Meanwhile, after Stuart Baxter was sacked as Kaizer Chiefs coach – for a second time – last week, it initially appeared that his son Lee may not be going nowhere, with the club making no mention of him during an official statement.

Baxter’s son Lee is the Kaizer Chiefs goalkeeping coach, with his father having roped him in when he was in charge of Bafana Bafana as well.

Chiefs had recently announced the addition of Aubrey Mathibe as a goalkeeper coach, and according to KickOff.com, there is an overwhelming likelihood that Lee Baxter’s contract will not be extended beyond June when it concludes.

“Lee’s contract with Kaizer Chiefs is set to expire in June this year. The club is already preparing for life without him after the arrival of Aubrey Mathibe as goalkeeper coach,” a KickOff source commented.

However, whoever takes over full-time at Naturena next season could perhaps have a say on the future of Lee Baxter.