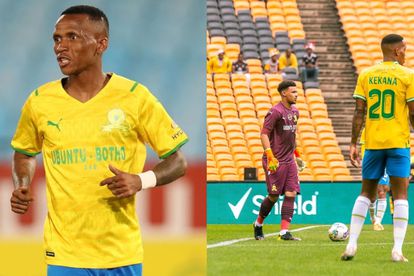 Surprise Ralani lived up to his nickname with an audacious chip that put the cherry on top of a great Sundowns performance in the Carling Black Label Cup.

Amazulu had badly lost their shape chasing the game but Sundowns were the picture of composure.

The Brazilians showed their superior coaching and organisation and Usuthu were no match at all in the Carling Black Label Cup.

Sundowns have a hard taskmaster

Rhulani Mokwena bemoaned the wastefulness of his side in front of goal.

“And in football matches, if you waste so many chances, they can get one moment and they can punish you, you know and they had one or two, with the set-piece they got and very early in the second-half they were in and around our box, they had a couple of half chances. So we’ve got to learn that we’ve got to score the goals and take our chances,” he said.

Players will often find themselves in unfamiliar situations in a match of this kind and Cassius Mailula clearly needed his coach.

“Ja, the only thing I said to Cassius, I said ‘What do you need? What support do you need?’ And I made an illustration about what happens in basketball, there’s a term in basketball called ‘next action’,” he said at the Carling Black Label Cup.

“It should be only one isolated bad action and those things happen but he’ll get there, he’ll learn, he’ll improve and he’ll be better.”