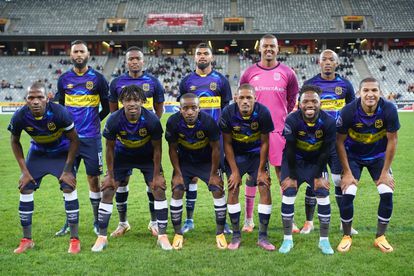 Stellenbosch welcome Cape Town City to the Danie Craven Stadium stadium for their final DStv Premiership match of the season.

The hosts are playing for a CAF Confederation Cup spot while the visitors have it all to play for in terms of the CAF Champions League qualification spot.

Stellenbosch FC head into today’s clash on 44 points, just two points behind Royal AM who are in third (CAF Confederation Cup spot).

Cape Town City on the other hand sit in second place on 49 points however Kaizer Chiefs and Royal AM are hot on their heels.

“We were still struggling defensively in terms of our structure, in terms of playing collectively.” Cape Town City coach Eric Tinkler said as quoted by IOL.

“in front and at the back in terms of the way I wanted the team to play. We weren’t very good on the night, and they hurt us on the counter in terms of their pace.

“I think we have learnt, we’ve got a lot better at that. We know how to play against teams with speed.

“I think Cape Town City showed that against Sundowns, in terms of Shalulile and the runs he makes. We kept him very quiet.

“(Ashley) Du Preez is always a threat. He is always a danger, and that’s how they hurt Sundowns on the counter. But we’ve improved in that respect, and ye, we do owe them!

“It’s a little bit disappointing seeing the numbers of fans at the stadiums. I know South African fans are very fickle in terms of supporting our teams only when they are winning.

“But we are winning. And I would love to see the City fans coming back to the stadium on Saturday.”