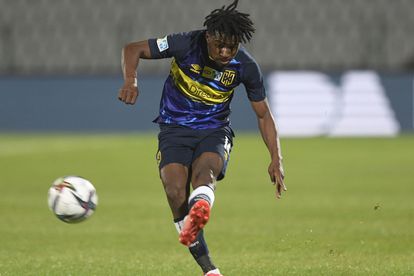 Mamelodi Sundowns have reportedly beaten Kaizer Chiefs to yet another big transfer target, in the form of Terrence Mashego, according to reports.

Mashego was touted as a player Chiefs showed a keen interest in, earlier in the transfer window with Sundowns hovering in the background.

News broke out on a fee agreement

Earlier this week, it was reported that Sundowns and Cape Town City had agreed a deal in principle for Mashego’s services, while personal terms with the player were yet to be finalized. Those, however, are not thought to be a stumbling block as it also emerged that the Bafana Bafana International has already said his goodbyes to his City teammates.

This morning further details of the move have emerged through The Sowetan, who report that a source close to the situation has all but confirmed that the move is really happening.

“Yes it’s true. The boy (Mashego) has been sold to Sundowns. I can’t reveal the fee Sundowns paid, but it’s something City couldn’t resist. Sundowns will announce him before the end of this week… it’s a four-year deal,” the source said to the publication.

These news would come as a shock to many as since Mashego declared his love for Chiefs, he had been reprimanded by City chairman John Comitis who reiterated that the player was not for sale. Now reports that City were open to sell the left back to the Glamour Boys seem to contradict that information. Sundowns stealing a march on the player after he previously stated he would join the club due to the amount of competition there, is also surprising. It now remains to be seen if this move will indeed go through.

Another target Chiefs have been beaten to

If or when Mashego’s move to Sundowns gets confirmed he would be the third major target that the Brazilians have beaten Chiefs to in the last three transfer windows. The two giants of South African football were known to be tussling for former SuperSport United midfield duo Teboho Mokoena and Sipho Mbule, who are now both at Chloorkop.