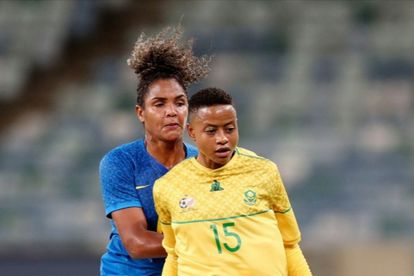 Banyana Banyana were trounced 6-0 by Brazil on Monday. Photo: @Banyana_Banyana/Twitter

Banyana Banyana were trounced 6-0 by Brazil on Monday. Photo: @Banyana_Banyana/Twitter

Brazil women’s national team coach Pia Sundhage has given a piece of advice to Banyana Banyana after playing them twice in the international friendlies.

The first clash saw Desiree Ellis‘ charges going down 3-0 on Friday night at the Orlando Stadium.

Where we thought the African champions noted down some lessons and would return stronger on Monday evening, things went from bad to worse with the 2022 Copa América Femenina winners grabbing a huge 6-0 victory.

The second game exposed the levels and the standard of football between the two teams, leaving Ellis with massive work to be done ahead of the 2023 FIFA Women’s World Cup.

Asked about her take on Banyana Banyana’s performances after both games, Sundhage admitted that there were individuals who distressed them.

“South Africa is the best team in Africa and that’s huge, first of all,” Sundhage responded to The South African‘s question.

“Secondly, there’s a small detail…there are some players you can talk about which I think [we] had a little problem with.

“Some of them are very technical and I think they have a bright future.”

In offering advice to the team and coach Ellis, the 62-year-old coach explained what Banyana Banyana must do when they’re in possession of the ball.

“When you keep possession, you keep the possession in order to find the right moment to go forward,” she added.

“And there are some interesting situations when we talk now about defending , ‘no we way stretched out, we need to do better against South Africa’.

“So for the coach, I guess it’s just to continue with what we [Brazil] are doing, we won the Copa America, so I tell the players, ‘we are the best all the time’ and gain some confidence.

“And at the same time, work on things that we believe will be important in the World Cup, and coach for South Africa will probably do the same thing.”