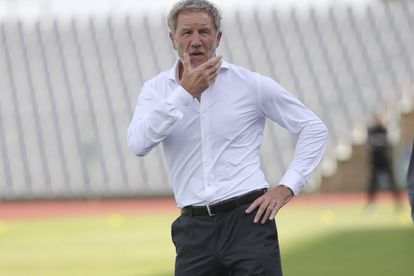 Baxter was sacked by Amakhosi last month and brings a wealth of experience having also coached Bafana Bafana and SuperSport United.

The 68-year-old has won the MTN8 once, the league twice and the Nedbank Cup and three occasions.

Baxter, as well as Steve Komphela and Kaitano Tembo, have all been linked with the AmaZulu job in recent days and Truter confirmed that the former is being courted by Usuthu.

“I see Stuart Baxter is also on the list (for the coaching post),” Brandon Truter said on Daily Sun.

Brandon Truter added that he’s open to the idea of working as Baxter’s assistant and hailed the Mamelodi Sundowns coaching trio of Rhulani Mokwena, Manqoba Mngqithi and Komphela for the way they are able to work together.

“Let’s cross that bridge when we get there. I admire the Mamelodi Sundowns co-coaches of Rhulani Mokwena, Manqoba Mngqithi and (senior coach) Steve Komphela,” he said.

“They have found harmony with one another. I also admire the coaches at Orlando Pirates, but you need to find harmony.

AmaZulu are currently seventh in the DStv Premiership standings with 40 points after 28 matches.

Technically they aren’t assured of a top-eight finish and a place in next season’s MTN8, but a win in either of their final two matches will ensure they do qualify.

AmaZulu are due to wrap up their 2021/22 league season with matches away to Cape Town City FC (Saturday, 14 May) and at home against Golden Arrows (Saturday, 21 May).

Both matches are scheduled for 15:00.