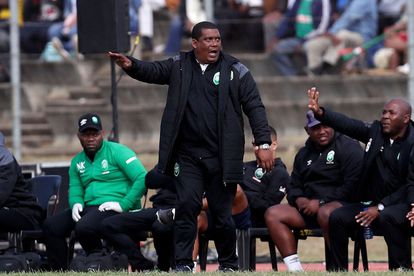 AmaZulu are said to be looking to bolster their squad with TWO more signings before the PSL transfer window closes in September.

Usuthu were held to a goalless draw by TS Galaxy in their first match of the season on Sunday at Bidvest Stadium.

After the match, AmaZulu coach Brandon Truter confirmed they aren’t done in the market.

Truter said he’ll put forward to the club’s board the names of the players he wishes to target.

“One or two. One or two more,” Truter said as per Idiski Times.

“We’ll see, but the club will make announcements about that. As a coach, I can recommend but ultimately, it has to get approved by a board.”

Truter was delighted by the performances of the new signings for AmaZulu.

“I I know what I can get from Gaba (Mhango), George (Maluleka) has shown today his experience, when the going got tough in the midfield, we kept it together in there as well,” Truter said.

“(Thendo) Mukumela had a bit of a baptism of fire with Linda Mbatha, but it came around there. as well. But it’s early days, it’s his first game in the PSL as well, he’s a quality player, so everybody will get better.

“Like I said, now we still have (Thembela) Sikhakhane on the bench, we have (Mbongiseni) Gumede who can play at right back, and we might have one or two new additions to the squad looking forward.

“But it’s a quality squad. It’s the first game, nerves, jitters, maybe not starting right mentally as well. There’s so much more that we can give, and so much better that we can do today.”