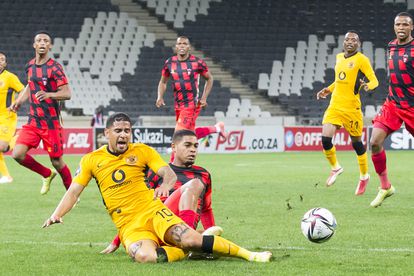 There is just one week left for all 16 DStv Premiership teams to finalize their squads for the new season!

READ | KAIZER CHIEFS FEATURE | 3 AMAKHOSI SIGNINGS TO GET EXCITED FOR

This article takes a look at the best three signings in the current PSL transfer window this :

Dolly was trending all over the country after he signed for Chiefs.

In the process, he became the highest-paid player in the DStv Premiership and at Amakhosi.

Dolly takes home an incredible R1. 45 million a month! That is over half a million more than the second highest-paid player at the club, Samir Nurkovic.

Nurkovic earns R930 a month. Dolly joined Chiefs from Montpellier and brings priceless experience, having played in Europe for the past few years.

The former Sundowns man has also been coached by Pitso Mosimane and won multiple PSL titles as well as the CAF Champions League. What a signing. Amakhosi fans will be hopeful that he repays every cent spent.

Kutumela signed for the DStv Premiership defending champions after months of speculation culminated in him joining finally The Brazilians.

Kutumela is one of, if not, the best signings this season. He scored 112 goals for Maritzburg United last season. Just imagine what he can do surrounded by the quality of Zwane and Shalulile.

The former Orlando Pirates and Maritzburg star is the only player out of all the PSL Player of the Year nominees who signed for a new club. Ironically, the other men on this list are already at Sundowns. Themba Zwane and Peter Shalulile completed the list.

Now, all 3 men will play together in one of the most dangerous attacking trios in the league.

He is my wildcard selection here but I believe he is going to be huge for Chiefs next season.

The new Amakhosi man joins Amakhosi from Swallows FC with tremendous energy and confidence. If his performance off the bench against Pirates in the Carling Black Label is anything to go by, then Amakhosi have secured a gem.

Sekgota is in his peak, at 24 years old and will only get better with game time and experience.

You can see all of these stars in action when Chiefs and Sundowns clash in the quarter-final of the MTN 8 on Sunday, 15 August.

Chiefs fans will be hoping to see Dolly make his much-awaited debut for Amakhosi against his former side.