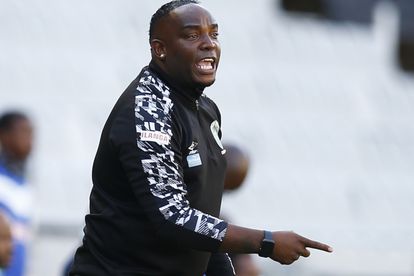 The former Orlando Pirates star believes Josef Zinnbauer is yet to understand the strength of his squad despite being at the club for two seasons.

Zinnbauer, who has the likes of Thembinkosi Lorch, Deon Hotto, Thulani Hlatshwayo and Vincent Pule amongst others has become somewhat infamous for chopping and changing his lineups in the league.

Benni McCarthy believes his ever changing starting lineups are proof that he’s yet to stamp a distinct game-plan to utilize his stars at the club.

“As South Africans we like to follow the latest trends – what gets done in Europe, what Pep Guardiola does and then we follow and make it our formation.” former Orlando Pirates striker Benni McCarthy told a virtual press conference.

“But I don’t think we have a typical formation, whatever formation you put up has to go with the players you have in your squad. The players that fill each role and bring out the best in them, that’s the kind of formation you would want to play. I’ve seen that Stuart Baxter is back at Kaizer Chiefs and he loves the 4-4-2 formation which his specialty, he likes playing that on a counter attack and use the speed of your wide men going forward.

“With the Orlando Pirates coach, I don’t know what formation he plays. It will be interesting to see. They change it up so much, so, it is difficult to say what is their strength. I don’t even think he knows the strength he has in the Pirates team because formation changes week in week out.” Benni McCarthy added.

Benni McCarthy has finally arrived back at AmaZulu after a delayed return to the club. He’ll be looking to follow his impressive debut season at the club up with strong performances in both the PSL as well as CAF Champions League.

City of Tshwane internet and prepaid services are down