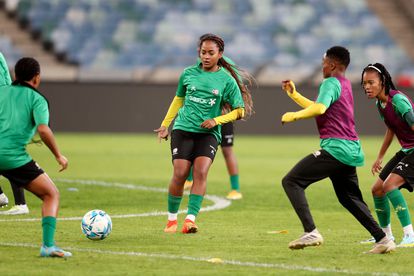 Banyana Banyana are back in action for their second international friendly match with Brazil at Moses Mabhida Stadium on Monday.

Desiree Ellis’ charges head into this encounter seeking redemption after being hammered 3-0 by the same opponents on Friday night.

Having seen how ruthless Brazil are in front of goal, Banyana Banyana certainly need to bring their A-game into this encounter.

Key will be how Banyana Banyana line up on the night as Ellis has all her best players that won the Women’s Africa Cup of Nations (WAFCON) available.

Refiloe Jane, Jermaine Seoposenwe and Linda Motlhalo are the three players expected to carry the hopes of Banyana Banyana against Brazil.

HOW TO WATCH THE BANYANA BANYANA VS BRAZIL MATCH ON TV

According to SABC Sport, this high-profile match between Banyana Banyana and Brazil will be screened LIVE on Open View channel 124 and S3.

A number of SABC radio stations will also broadcast the game.

SuperSport has also confirmed the broadcast details for this encounter, revealing that they will screen it LIVE on PSL channel 202 on the day.