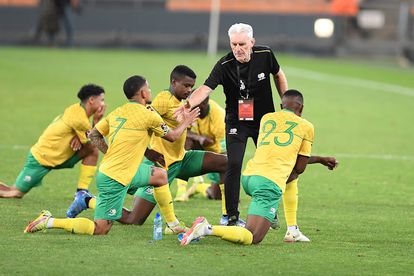 WATCH THIS! – KEAGAN DOLLY VS KGAOGELO SEKGOTA IN EPIC BATTLE

Three Amakhosi stars were dropped by Broos, with Njabulo Blom, S’fiso Hlanti and Njabulo Ngcobo all being excluded.

Hlanti missed most of the past couple of months with injury. Whilst Ngcobo has not played much football this year either after picking up severe burns in training. While both players are fit, they have not been playing regular football. Meaning, their exclusions make sense.

READ | PITSO MOSIMANE: HOW MUCH HIS NEW AL AHLY CONTRACT PAYS PER MINUTE

However, perhaps the biggest surprise was seeing Blom dropped.

Blom has been an instrumental part of Chiefs this season, he has started almost every game under Stuart Baxter and has flourished. Blom is solid at the back and has the ability to make overlapping runs while whipping in some decent crosses.

READ | DRAMA WITH THE PSL, BAFANA BAFANA AND HUGO BROOS!

There is some good news for Amakhosi though with Brandon Peterson earning a call up to the national side.

It remains to be seen if he will make the final squad. Regardless, he will be training with Bafana captain Ronwen Williams where he can gain valuable experience from South Africa’s number one.

Peterson has been in excellent form for Chiefs, he made several crucial saves against Orlando Pirates and was the difference between winning and losing a thrilling Soweto derby on the day.

How do you feel about Hlanti, Ngcobo and Blom’s exclusion?