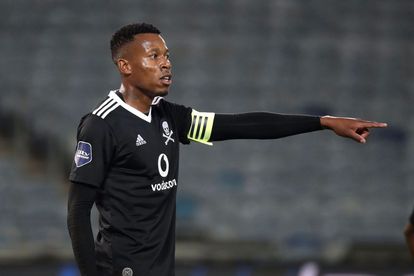 Former Orlando Pirates coach Augusto Palacios has had his say on the departure of Happy Jele who recently left the Buccaneers after his contract ended in June.

The Soweto giants offered ‘Magents’ a non-playing role, but the 35-year-old turned it down, opting to continue playing elsewhere.

Since waving goodbye to the club he served for 16 years, Jele has been a free agent.

However, he has been linked with with the likes of Royal AM and SuperSport United.

Palacios believes the Middelburg-born defender still has what it takes to deliver the desired performance with the two having worked together for a long time.

‘HE IS STILL A GOOD PLAYER’ – PALACIOS ON JELE

“Age in football shouldn’t be what counts for any player,” Palacios said as per KickOff.

“How long did Lucky Lekgwathi play? How old is Christiano Ronaldo now?

“As long as you’re keeping yourself fit and in good shape you can play until any age and there is nothing wrong with that in my opinion.

“He [Jele] is still a good player and we still have players at his age playing.

“What we need to understand is that in football it also depends on the financial aspect.

“What is clear is that he is a consistent player who scores goals, but this is football.

“Every club has its policy, and we need to respect that especially when we are outside.

“When Benni McCarthy arrived here some people thought he was finished but look at what he did.

“I don’t believe age should determine if a particular player should continue playing.

“For me it must not be about age, but the performance and I understand that with some clubs they don’t agree on the financial aspect.

“Age is nothing, but financial side is important because maybe some clubs cannot afford.

“Plus, some coaches prefer a different type of players.”

ALSO READ: ‘KAIZER CHIEFS NOT CHALLENGING FOR THE LEAGUE THIS SEASON’ – CLUB LEGEND