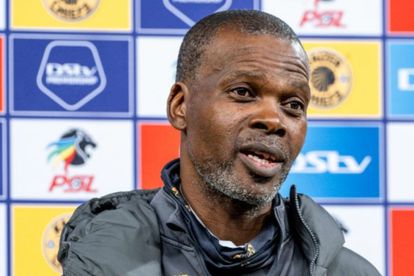 Kaizer Chiefs coach Arthur Zwane has sent a message to the Amakhosi faithful following an embarrassing 4-0 defeat to Mamelodi Sundowns.

The Phefeni Glamour Boys came into the clash full of confidence after a midweek 3-0 victory over Maritzburg United.

READ ALSO: WHAT BAFANA BAFANA SHOULD DO TO REDEEM THEMSELVES

Perhaps, the loss to Masandawana pinpointed the areas they need to fix going forward.

Zwane said Kaizer Chiefs are still a “work in progress” and promised the fans better days in future.

“We will definitely get it right and we will also be back and dominate like we used to dominate in the past because right now we are playing in patches. We are trying to get the combinations right, but we will get it right.

“And obviously thanks to the fans for their support. They stayed throughout, even though it was difficult. I know how they feel right now. But one day they will smile.”

Zwane added that Kaizer Chiefs had an opportunity to turn the game around had Reeve Frosler scored when he got a gift ball from Sundowns. He believes that goal would’ve rejuvenate them.

“But we missed that one and from there a penalty, maybe it was going to be 3-2 and then the game was open again. So, we just did not come to the party, we won’t ourselves. I think credit to Sundowns technical staff. Credit to their team, they have got a quality team,” Zwane added.

The next league match for Amakhosi will be against Richards Bay FC on Saturday, 20 August at the Moses Mabhida Stadium in Durban.