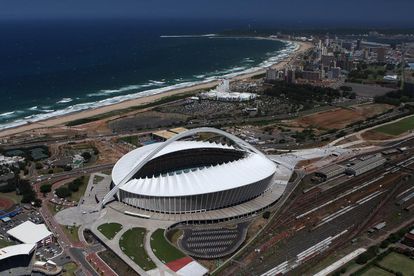 AmaZulu will return to the Moses Mabhida Stadium for their home matches after playing at Kings Park in recent seasons.

Their reward was one of two spots available to South African teams in this season’s CAF Champions League.

Recently Benni McCarthy’s men played their first ever CAF Champions League preliminary round clash at the stadium which was used for the 2010 Soccer World Cup – and have since secured the venue for future matches.

Usuthu president Sandile Zungu said: “We are very excited to come back to Moses Mabhida Stadium, we thank the mayor for agreeing to this deal.

“Ethekwini Metro has been good to us and we are happy to have this relationship with the mayor as AmaZulu.”

“Usuthu will make its return to the famed grounds from next month when they host TP Mazembe in their CAF Champions League Round 2 clash [on the weekend of October 15-17].”

Ethekwini mayor, Councillor Mxolisi Kaunda added: “We are pleased to have the club here, we look forward to enjoying this relationship with AmaZulu FC and we’ll continue supporting all the clubs in Durban.”

AmaZulu next home DStv Premiership match will be on Saturday, 2 October against Kaizer Chiefs at 15:30.