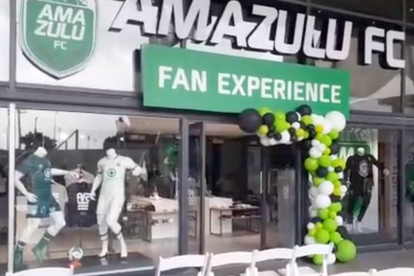 Durban’s DStv Premiership side AmaZulu have done what many clubs are yet to do, Usuthu have opened an official club merchandise store at the iconic Moses Mabhida Stadium.

Following the historic qualification in the CAF Champions League under Benni McCarthy two seasons, ago, which included progress to the group stages, AmaZulu had taken a big marketing stride.

To celebrate 90 years of existence, the club launched their own merchandise store at their prestigious home ground of Moses Mabhida on Tuesday.

The news was confirmed by FARPost via social media.

“AmaZulu have launched a new shop as part of their plans to celebrate the club’s 90th anniversary,” the outlet reported from the event.

“Usuthu is the first team in KZN to have this kind of facility, which also has space for meetings and drinks,” the report added.

KAIZER CHIEFS IN THE MTN8 SEMI-FINALS

Meanwhile, AmaZulu are looking ahead to one of the biggest games of the season.

Brandon Truter‘s side have been drawn against Kaizer Chiefs for this term’s MTN8 semi-finals. The game will take place during the first weekend of October.