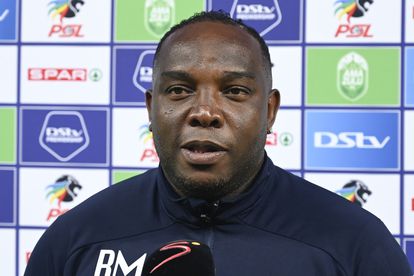 Less than 48 hours after the sensational sacking of Benni McCarthy as head coach, AmaZulu released a statement confirming that former Swallows coach Brandon Truter had been named as interim coach.

Last Friday McCarthy was fired by AmaZulu, who currently sit ninth in the DStv Premiership table.

The Usuthu statement read: “AmaZulu is pleased to announce the appointment of Brandon Truter as interim head coach with immediate effect until the end of the current 2021-22 season.

“We look forward to competing in the league with the remaining seven games left.

“The search for the head coach to lead the team beyond this season has commenced and should be finalised before the end of April.”

In November 2021, Truter and his entire entire coaching staff were fired by Swallows following a series of poor results.

Prior to that he led the Dube Birds back to the top flight by winning 2019/20 National First Division league title.

Truter’s first match in charge at AmaZulu is actually NOT a DStv Premiership match, but rather the club’s sixth and final CAF Champions League group match away against Guinean side Horoya AC on Friday, 1 April at 18:00 SA time.

Thereafter, Truter will have seven league matches in order to try and get AmaZulu into the top eight in the final standings and thus secure a MTN8 spot next season.

Four of AmaZulu’s final seven matches will be away matches and include a trip to Truter’s former club Swallows.

Three of AmaZulu’s remaining opponents are currently ranked ahead of them, with four below Usuthu in the standings.