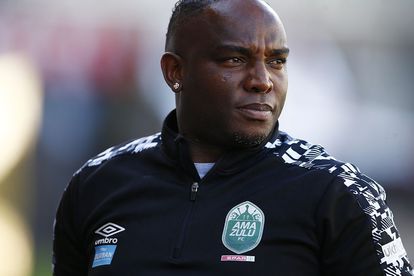 AmaZulu coach Benni McCarthy is confident his charges will secure second position in the DStv Premiership this season and clinch a spot in the CAF Champions League.

AmaZulu coach Benni McCarthy is confident his charges will secure second position in the DStv Premiership this season and clinch a spot in the CAF Champions League.

AmaZulu head coach Benni McCarthy has revealed that his side had been rocked by a COVID-19 outbreak ahead of the MTN8 quarterfinals.

Cape Town City got the better of AmaZulu over the weekend, handing last season’s League runner’s-up a first round Knockout blow but Benni McCarthy has since revealed the circumstances surrounding his side’s early exit.

According to the Bafana Bafana legend, no less than 11 players had tested positive for COVID-19 and subsequently were unavailable for selection against Cape Town City FC.

“It is not an easy game away from home against Sundowns, but we can prepare ourselves very well,” Benni McCarthy said ahead of his side’s League opener against Mamelodi Sundowns on Friday night as quoted by TimesLive.

“I think this week for me it is going to be just to see if we will be able to get our players registered in time and ready for the Sundowns game because it was crucial players who I was not able to make use of [against Cape Town City].

“We had 11 players who tested positive for COVID-19 so they were self-isolating. They will be back at training and we will have everyone available but these guys have lost 10 days after having to isolate. From Monday to Thursday they had to get themselves at a decent level so we can compete against the league champions.” – Benni McCarthy concluded

Mamelodi Sundowns host AmaZulu on Friday evening at Loftus Versfeld stadium in the 2021/2022 DStv Premiership opening match of the season.

Benni McCarthy’s side along with the Brazilians will both be competing in the CAF Champions League this season. Mamelodi Sundowns have been exempted from the opening qualification round while AmaZulu face Malawi’s Nyasa Big Bullets FC.

Trending Twitter video: “They killed me, they destroyed me” – Gospel singer Sechaba Pali