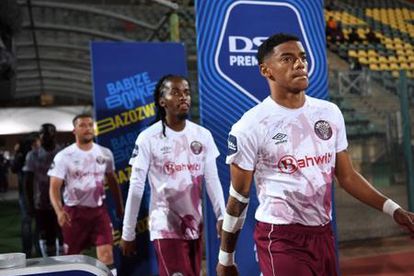 The agent of new Kaizer Chiefs target Dillon Solomons has opened up on when the Soweto giants will know what the future holds for the player.

Solomons has emerged as a surprise target for Chiefs, following his performances for Swallows FC last season.

Solomons scored a brace against Chiefs

His name will still be fresh in the minds of the Chiefs faithful too, as Solomons was on hand to score two penalties against Amakhosi in the final game of the DStv Premiership season. Those two goals were almost enough to secure the top flight status of Swallows but they would eventually lose out on that automatic safety, as Bernard Parker scored his final goal for the club to equalise.

That equaliser then sent Swallows to the promotion/relegation playoffs which seem to be the reason any potential move for Solomons to Chiefs may be delayed. According to the player’s agent, Grant Nieuwenhuys, the wing-back’s future will only be discussed after the conclusion of those playoffs. Nieuwenhuys also made it clear that Amakhosi would be facing stiff competition for the player’s services.

Agent explains when decision will be made

“I have been getting calls, no less than five clubs have called for Dillon (Solomons) but we are not making any decision because we want to give Swallows and their Chairman the respect they deserve. Dillon needs to first help the club stay up and then we will discuss his future. Myself, with the Chairman of Swallows and whoever, will take a firm decision directly after the play-offs, that is where we at. I know there are rumours and stuff but you can take it from me, it’s not that I haven’t spoken to clubs, but I’ve told them the same thing. Let’s see what happens with Swallows come next Wednesday.”  Nieuwenhuys told iDiskiTimes.

At the age of 23, with his pace and energy, Solomons seems to fit the criteria that the new Chiefs regime seem to be going for. It remains to be seen, however, if he will end up at Naturena eventually.