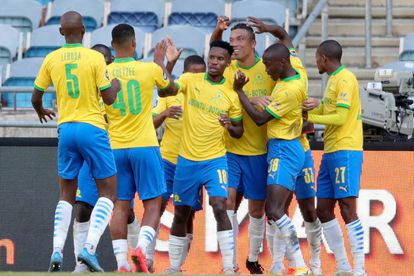 Ricardo Nascimento of Mamelodi Sundowns celebrates with teammates scoring a penalty during the DStv Premiership 2020/21 match between Orlando Pirates and Mamelodi Sundowns at Orlando Stadium, Johannesburg, on 02 May 2021 ©Samuel Shivambu/Sports Inc

Ricardo Nascimento of Mamelodi Sundowns celebrates with teammates scoring a penalty during the DStv Premiership 2020/21 match between Orlando Pirates and Mamelodi Sundowns at Orlando Stadium, Johannesburg, on 02 May 2021 ©Samuel Shivambu/Sports Inc

It was a remarkable season with the Brazilians wrapping up the title with three matches to spare.

A season defined by many key moments:

READ | PERCY TAU INSISTS HE IS STAYING AT BRIGHTON

Shalulile has been one of the players of the season.

Shalulile is an out-and-out attacking striker, a true natural in front of goal.

The Namibian international scored 11 league goals in just 22 appearances – imagine if he had played all matches this season.

APPOINTMENT OF MANQOBA MNGQITHI AND RHULANI MOKWENA AS CO-COACHES

Mngqithi and Mokwena were personally mentored by Pitso Mosimane during the era that brought Mamelodi Sundowns great success.

They experienced conquering Africa in 2016 and gained priceless experience during the years with ‘Jingles’.

The club appointed them as co-coaches and it worked out to be a stroke of genius from management.

Despite the previous success of winning the last three campaigns, Mamelodi Sundowns players kept the hunger and ambition in every single game.

They took pride in their title, defending it with passion and dedication.

The players play for each other, the jersey and the trophy and it can be seen in how they play. If they score, they don’t sit back. When they defend, they put their bodies on the line.

Themba Zwane has been nominated for Player of the Season after winning the award last year. This epitomises the continuous hunger and drive of this club.

The same applies to the man in goal, Denis Onyango who is again nominated for the Goalkeeper of the Season award after keeping 16 clean sheets in 25 games.