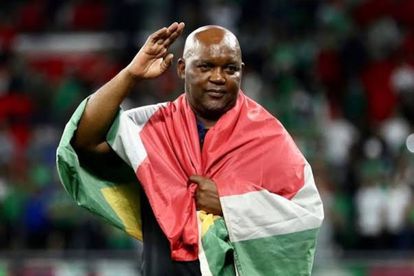 Pitso Mosimane has had an in influence in this year’s FIFA World Cup already. Did jingles help inspire Lionel Messi’ and Argentina’s famous shock defeat to Saudi Arabia?

Mosimane had an indirect influence on Saudi Arabia’s famous 2-1 victory over Messi’s Argentina in the 2022 FIFA World Cup in Qatar.

It was one of his players who came on in a truly inspirational second half display, according to KickOff.

Despite Mosimane’s Al Ahli only playing in the second-tier, they have two stars in the current Saudi Arabia World Cup side.

However, One of these men, Haitham Asiri, came off the each to help inspire Saudi Arabia to a famous 2-1 comeback win over Messi’s Argentina.

This is one of Mosimane’s key players.

Asiri was full of energy and life when he came into the pitch and this is just what they needed to help inspire one of the biggest upsets in World Cup history.

Furthermore, this isn’t the only player that Mosimane is coaching who is playing for Saudi Arabia in the World Cup.

Goalkeeper Mohammed Al-Rubaie was on the bench throughout this encounter, he too plys his trade for Mosimane’s side.

Mosimane is practically at home this World Cup because Saudi Arabia is the only nation that shares a sole land border.

Therefore, his influence continues to grow globally – directly and indirectly.