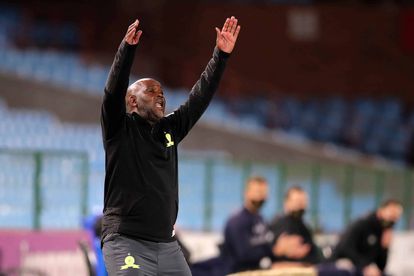 Pitso Mosimane has confirmed that he’s willing to take Mamelodi Sundowns in COURT, for ‘justice’.

The recently sacked Al Ahly mentor has been at loggerheads with his former employers since leaving the club.

Mosimane documented the threats and lawyers letters he received while coaching at Al Ahly on numerous occasions.

Accirding to Mamelodi Sundowns however, Pitso Mosimane and his wife (who also acts as his agent) owe the club R8 million!

Pitso Mosimane has since confirmed that he’s ready to fight his former side in court if it comes to it!

“What makes me feel like this is because all these things happen when I am playing in the Champions League.” Pitso Mosimane said on PrimeSport with Mahlatse.

“The lawyers of the Motsepe family (Mamelodi Sundowns owners) always send me letters.

“Why don’t they send them when I am not playing? There is a court case, but do I really want to go to court?

“I don’t want to. But If I have to protect my name and myself and justify, I will go to court but it is not nice for football.”

After a lengthy trophy laden spell at the club, Mamelodi Sundowns pulled out all the stops to hold onto Mosimane. A bumper package was offered to the Kagiso born mentor in 2020.

Pitso Mosimane was earning R1.5 million a month according to a report revealed by Sunday World.

The contract would last for four years meaning Mosimane would have walked away from the Brazilians with a smacking R72 million by the time his contract was up.

That however wasn’t to be as ‘Jingles’ had his new contract terminated just four months in after joining Al Ahly.

Mamelodi Sundowns then demanded a near R8 million in agent fees repayment by Pitso Mosimane and his wife whose company acts as his managing agency.