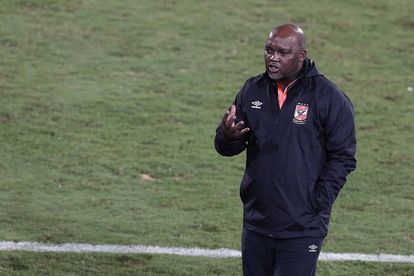 Al Ahly coach Pitso Mosimane says he’s never been so “angry” with his team since his arrival in Egypt as he was on Thursday night.

The Egyptians giants completed a come-from-behind 3-2 win over Arab Contractors to move back to the top of the standings.

Commenting during the post-match press conference, Pitso Mosimane praised his players for their efforts, but said that they should’ve done better with their chances.

“I don’t think the two halves of the match were different because we were able to create chances in both of them.

“In the first half, we created a lot of opportunities in the first 10-15 minutes, and we should have taken advantage of them. This also happened in the Bank Al Ahly game.

“This means that there is a problem and we must address it.

“I think we like to play under pressure. Today we were able to come back in the result and win, and this is dangerous because it may not happen next time.

“But the positive part is the spirit of the players and the fight and always having faith in our ability to win,” Pitso Mosimane added.

READ | CRISTIANO RONALDO SCORES 760 CAREER GOAL BUT IS IT A WORLD RECORD?

Mosimane revealed how he reacted at half-time in order to push his players to fight in the second half.

“Since my arrival in Egypt, I have not gotten angry at the players as much as today. I always try to be calm, but today we were not good.” Mosimane admitted.

“I must also praise the technical staff because we made some strange decisions that changed the way we play. We took different decisions, but they had positive consequences.

“I changed the way of playing three times in the second half and we were running against time. We had to score quick goals to turn the game around.

“At one point I made Afsha play in the No 8 position instead of 10, and pushed Marwan Mohsen and Mohamed Sherif as strikers.

“I also put Hamdi Fathi in the defensive line, and we sometimes played 3-4-3,” Pitso Mosimane explained.

Following their win, Al Ahly are now back on top of the log with 20 points, one ahead of second-placed bitter rivals Zamalek who have a game in hand.

Al Ahly will next be in action on Tuesday, 26 January against sixth-placed Pyramids FC.

Man messages “Prince William” asking to be King of England