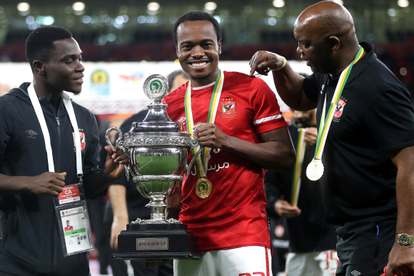 FIFA is officially being investigated for their inexplicable and bizarre snubbing of Al Ahly coach, Pitso Mosimane.

They are requesting an investigation into the shock snubbing of Mosimane. It is surprising that Mosimane was removed from the shortlist for FIFA Coach of the Year. After everything he achieved with Al Ahly, winning the CAF Champions League, CAF Super Cup and Egyptian Super Cup.

The letter written by Sunshine Mbele, AZAPO secretary for sport and recreation protests against ‘the unfair treatment of Africans under FIFA”, according to to the Sowetan.

Mbele is infuriated, he feels that FIFA has gone backwards. Mosimane’s exclusion emphasized this point.

FIFA are now under investigation for their snubbing of Mosimane.

He conquered Africa, dominated Europe and even lead the Egyptians to a record third-placed finish in the Club World Cup. There is not much more he could have achieved as coach.

Let’s hope some justice is brought about by these investigations. Even New York Times is behind Mosimane:

“Mosimane has enjoyed a year that holds up in comparison to any of his peers. He has not, though, been granted the same recognition. When FIFA published its seven-member shortlist for its men’s coach of the year award a few weeks ago, Mosimane — who had lifted three continental honours in 2021 — was not on it,” stated the publication.