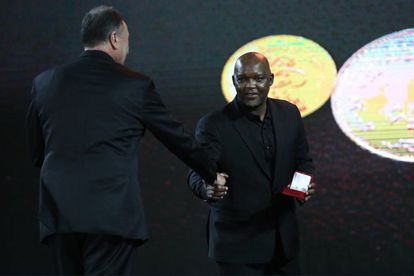 Al Ahly coach Pitso Mosimane was on Sunday called to a meeting by his bosses following the team’s 1-0 loss to Al Masry on Saturday.

This was Al Ahly’s first league defeat of the season, but Mosimane’s men still top the standings with 31 points from 12 games.

And according to the club, the Al Ahly hierarchy called Mosimane to the meeting to discuss how they could support the team going forward.

The meeting was chaired by club president Mahmoud Al-Khatib while a member of board of directors Hossam Ghaly and director of football Sayed Abdel Hafeez were also present.

The Al Ahly bosses want to make sure that Mosimane has all the support he needs in order for him to deliver both domestically and in the CAF Champions League.

Al Ahly have suffered two defeats in their last five matches, including a 1-0 loss to Mamelodi Sundowns in the CAF Champions League on 12 March.

Captain Mahmoud Al-Khatib, president of the club, held a meeting with Pitso Mosimane, coach of the first football team, in the presence of Captain Hossam Ghaly, member of the board of directors, and Captain Sayed Abdel Hafeez, director of football in order to discuss some matters relating to the team, whether during the last stage, with regard to preparing for the coming period, and working to support the team and provide its needs to complete its period strongly at the local and African levels.

Police continue search for boy, 5, missing since 31 May in Upington