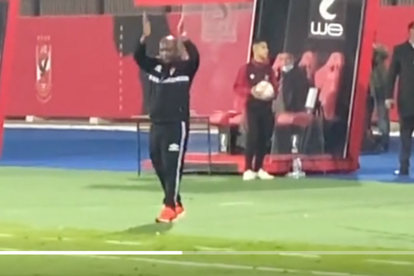 Pitso Mosimane has achieved what many men have failed to do, he has earned the adoration of the unforgiving Al Ahly fans. This is thanks to his rather fast success at Africa’s greatest ever club.

Al Ahly fans are infamous for extreme impatience and ruthless rejection of coaches, but South Africa’s Pitso Mosimane does not really know anything about that.

The former Mamelodi Sundowns needed just about three seasons to become an instant legend in Cairo.

Following a third-place finish at the FIFA Club World Cup this month, Pitso Mosimane was showered with a special welcome on Tuesday.

A video of the Red Devils fans has been posted online. It captures the fans singing “Pitso, Pitsoooo, Pitsoo,” before the Kagiso-born coach, knowns as ‘Jingles’ – stepped forward away from the bench to applaud the emotional fans and soak in the praise.

Check out the moment in the video below:

ALSO READ: Pitso on Ahly vs Sundowns – I have bigger things to worry about

PITSO MOSIMANE HINTS AT HIS NEXT COACHING DESTINATIONS

In other recent updates, the former Mamelodi Sundowns and Bafana Bafana coach revealed where he is likely to move since Europe is apparently impossible for him.

Despite winning three CAF Champions League titles and a string of domestic championships at Mamelodi Sundowns, Pitso said coaching in Europe is not possible.

“Those are fairytale stories that will never happen,” Pitso Mosimane said. Read the full story here.

LATEST: Kaizer Chiefs aren’t done recruiting… who else is coming?