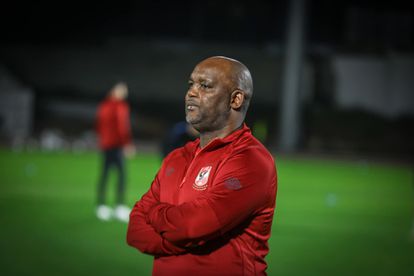 Al Ahly coach Pitso Mosimane says his team paid the price for the missed chances against Tala’ea El-Gaish in the Egyptian Premier League.

The African champions were held to a 0-0 draw by El-Gaish in mid-week, as reported by The South African website.

And they had no one to blame but themselves, with Percy Tau missing two chances in front of goal as well as Salah Mohsen, Mohamed Sherif, and Hossam Hassan who all failed to find the back of the net.

Speaking after the match, Pitso Mosimane said: “We missed a lot of chances against El-Gaish and this has been going on since the Raja (Casablanca CAF Champions League) match.

“I know that the El-Gaish match has special circumstances, but if we had played for an extra hour, we wouldn’t have scored.

“Shooting from distance is certainly one solution to break through the defensive block, but no player tried that.

“We still have a lot of games to get back on track, but that’s no excuse for not scoring.

“Percy Tau wasted chances, Mohamed Sherif wasted chances, Hossam Hassan participated and wasted and also Salah Mohsen. The four strikers in my team were wasteful, what do I do?

“Amr El-Sulya was not supposed to start the game because he is suffering from a lot of fatigue, but Hamdi Fathi was also fatigued, so we decided to start with the El-Sulya.

“I only have three midfielders on my team and we have a lot of important matches ahead of us in the coming period.

“I can’t talk about fatigue and I can’t find excuses. Throughout the game, we wasted a lot of chances.

“Al Ahly players have participated in the Arab Cup, the AFCON, the Club World Cup, and the World Cup Qualifiers and so far they are participating with the team, and you will see what else happens to them next June when they take part in the AFCON qualifiers,” Mosimane concluded.

Percy Tau started the match but was substituted in the 69th minute.

Al Ahly are now three points behind leaders Zamalek in the standings, but do have two matches in hand.

Al Ahly will next be in action away from home against 12th-ranked Ceramica Cleopatra on Saturday, 30 April at 21:30 (SA time).