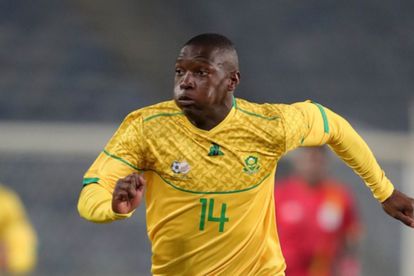 Bafana Bafana international Bongokuhle Hlongwane has been pictured for the first time in action for new club Minnesota United.

Hlongwane only recently joined Minnesota from DStv Premiership side Maritzburg United during the January transfer window.

Hlongwane was thought to be on his way to Sundowns

Hlongwane was reported to be on the verge of joining Mamelodi Sundowns from Maritzburg in the January transfer window. In fact, this was not the first window that the the 21-year-old was thought to have all but completed a move to Sundowns in. During the previous window it was said that the speedy winger had all but agreed to join the Tshwane side in the same deal that saw Thabiso Kutumela move to the country’s capital.

The same was then said by a different publication this time around, with its sources adamant that the player was close to a move to Sundowns during the current transfer window. Doubt was then plunged on that move when Maritzburg United Chairperson Farook Kadodia came out to state that the players intentions were to reject any local move and look for an opportunity abroad instead.

In the end it would be Minnesota who would win Hlongwane’s signature, and in doing so Hlongwane immediately entered the club’s history books twice. He will effectively become their first ever South African player, as well as the club’s first ever u22 initiative signing, when the league kicks off. Not bad for a start before a start at a new club huh?

Hlongwane joined the Major League Soccer(MLS) side while they were still in pre-season, and he was on hand to feature for Minnesota in their last preparation game before the start of the new MLS season. It will now be interesting to see how Hlongwane fits in to the game in the United States of America, and will now be looking to use the move as a stepping stone to Europe.

Here is a picture of Hlongwane in action for Minnesota: