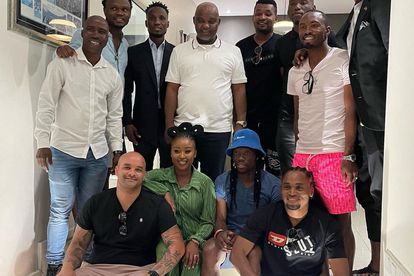 Last month it was formally announced that Pitso Mosimane would be joining Al-Ahli Saudi FC on a two-year deal, which is his first full-time coaching gig since leaving Egyptian powerhouse Al Ahly.

Al-Ahli Saudi FC have played five matches to date in the 202/23 season and find themselves in seventh place after two wins, two draws and a defeat. They will travel to face eighth-ranked Jeddah on Wednesday, 5 October. Kick-off is at 19:15 (SA time).

Prior to Mosimane’s departure, a photo has emerged of him spending time with a host of former players, including the likes of Siphiwe Tshabalala.

Meanwhile, Mosimane and his technical team addressed the media in Sandton, Johannesburg, last week ahead of their debut game in charge of the Saudi club.