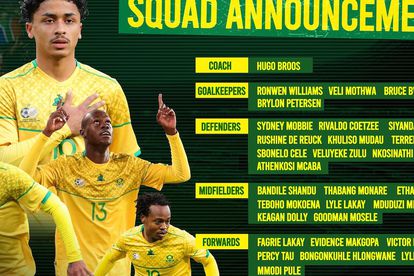 Bafana Bafana are scheduled to play international friendlies against Guinea on Friday, 25 March and France at Stade Pierre-Mauroy on Tuesday, 29 March.

Reports had previously suggested that the possible squad that Bafana Bafana coach Hugo Broos was contemplating for the upcoming friendly against world champions France may not include Percy Tau.

The Bafana star is a key member of Pitso Mosimane’s Al Ahly side, but considering that the South Africa vs France match is a ‘friendly’, the Egyptian giants are not obliged to release Tau unless an agreement can be reached between both parties.

That would now appear to be the case, with Tau among the names listed below.

A preliminary Bafana squad has been selected, with the final list to be announced in due course