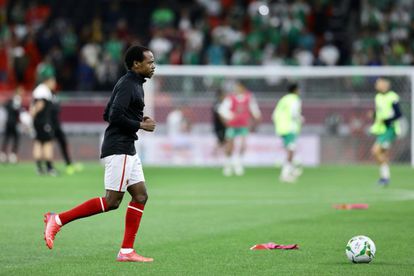 Abla revealed the players had been instructed to self-isolate prior to an EPL Cup game for Al Ahly, who have been drawn against five other Egyptian Premier League rivals – with all 18 teams competing concurrently while the Africa Cup of Nations is played out in Cameroon.

Three of the Group winners will advance to the semi-final alongside the best second-placed team in the group stages.

In a big boost for the Egyptian club, Tau has now returned to training and could feature in Al Ahly’s next League Cup match against Al Mokawloon on Friday.

“Percy Tau, Al Ahly forward, returned to the team’s full training session after testing negative for COVID-19,” the club said in a statement on their website.

“Sayed Abdelhafiz, Al Ahly director of football, stated that the player performed a special recovery program for two days, before returning to the team’s full training.

At the end of last year, Tau played an instrumental role for Al Ahly as the Egyptian giants recorded a 6-5 penalty shootout win over Raja Casablanca in the CAF Super Cup in Qatar.

Raja Casablanca looked to be heading for a win as they led 1-0 for the better part of the game but Al Ahly equalised late in the second half, with Tau helping to set up the crucial goal.

The game had to then be decided on penalties, with Al Ahly holding their nerve as Pitso Mosimane bagged his third CAF Super Cup trophy.

TAU HAS BECOME A TALISMANIC FIGURE AT AL AHLY

The win saw Percy Tau claim his second CAF Super Cup medal, having previously won it with Mosimane in 2017 at Maritzburg United.