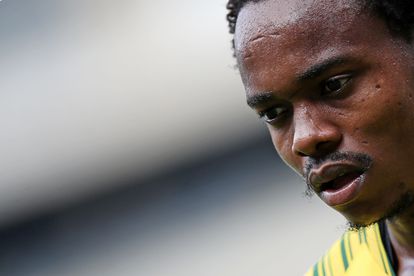 Bafana Bafana star Percy Tau is trending after confirmation of his imminent move to Egyptian side Al Ahly. ©Muzi Ntombela/BackpagePix

Bafana Bafana star Percy Tau is trending after confirmation of his imminent move to Egyptian side Al Ahly. ©Muzi Ntombela/BackpagePix

Bafana Bafana star Percy Tau is trending after confirmation of his imminent move to Egyptian side Al Ahly.

The move has been a long-time coming after he failed to make an impact at Brighton & Hove Albion following his recall to the English club in January this year.

Tau signed for Brighton from Mamelodi Sundowns for R50 million in July 2018, but had to wait two and a half years before finally making his top-fight debut in the UK.

READ | ROYAL AM SLAPPED WITH R4 MILLION FINE BY THE PSL

Finally, in January 2021 he returned to England where he made his debut in both the FA Cup and English Premier League.

Before he becomes too famous for the media, here are 10 stats and facts we bet you didn’t know about Percy Muzi Tau.

2. Tau made his professional debut for Mamelodi Sundowns against Orlando Pirates on 25 February 2014 as an 85th-minute substitute in a match the Brazilians lost 1-0.

3. He scored his first professional goal for Mamelodi Sundowns in the Nedbank Cup against Golden Arrows on 22 March 2014.

4. Tau was loaned to Witbank Spurs during the 2015/16 Premier Soccer League (PSL) season.

5. After returning to Mamelodi Sundowns, Tau helped the Brazilians to the 2017/18 league title by scoring 11 goals to share the Lesley Manyathela Golden Boot award with Rodney Ramagalela.

6. Tau made his Bafana Bafana debut against Angola in a 2-0 defeat on 17 October 2015 in Johannesburg.

7. He has scored 12 goals for Bafana Bafana to date, all against fellow Africa countries, apart from one against Paraguay in a friendly at the Moses Mabhida Stadium in Durban on 20 November 2018.

8. Tau was loaned to three Belgium clubs while waiting for his work visa in England to be approved. Those Belgian sides were (in order): Union SG, Club Brugge and Anderlecht.

9. On 20 July 2018, Tau signed a four-year contract with Brighton & Hove Albion for an undisclosed fee which was reported to be in the region of £2.7 million (R50 million at the time), which was a South African record for the sale of a domestic player.

10. On Thursday, 26 August he signed for Egyptian giants Al Ahly.

BONUS! Percy Tau is prolific on Twitter and after ‘following’ The South African, you should follow him too!

‘This will give looters ideas’: Stage 6 fuels fears of MORE riots in SA

SIX arrested in connection with burglary at Ronaldo’s Ibiza villa