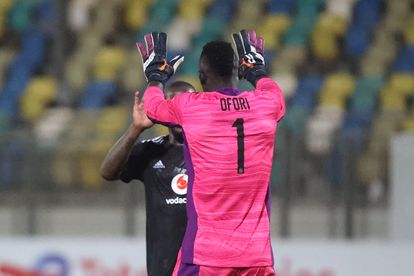 Orlando Pirates had to deal with the harsh realities of playing football on the African continent against Al Ahly Tripoli of Sunday. Photo: Abbas Farda/BackpagePix

Orlando Pirates had to deal with the harsh realities of playing football on the African continent against Al Ahly Tripoli of Sunday. Photo: Abbas Farda/BackpagePix

Orlando Pirates goalkeeper Richard Ofori has revealed how he wants this generation of players to be remembered in this year’s CAF Confederation Cup.

Ofori and his Bucs teammates will travel to Uyo, Nigeria for their CAF Confederation Cup final date with RSB Berkane on Friday night.

Kick-off at Godswill Akpabio International Stadium is at 21:00 SA time.

Now, Ofori has admitted that Pirates have come a long way to reach the final, saying the CAF Confederation Cup journey wasn’t an easy one for them as it had its challenge.

And while they did tremendously well to reach the final, Pirates haven’t been that impressive in the league, and Ofori said their focus is solely on winning the CAF Confederation Cup.

Furthermore, Ofori said Pirates should go for the kill against Berkane, saying nobody remembers the runners-up but the winners, and that’s how the Ghana international wants his teammates to be remembered.

“The CAF journey has been very good but it was not easy. Sometimes we would spend around 15 hours traveling,” Ofori told reporters on Tuesday.

“Things have not been as good in the PSL, but we have shifted our focus to the CAF competition and to make ourselves and the country proud by winning it,” continued Ofori.

“People remember the winners. People know those who make history by winning the trophy. We want to make history for ourselves and to be remembered as the guys who won this trophy for this big club,” he concluded.