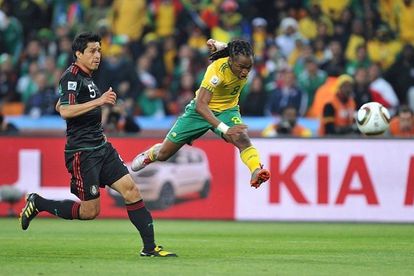 It’s exactly 12 yeras to the day since Siphiwe Tshabalala scored this wonder goal at the 2010 World Cup.

It’s exactly 12 yeras to the day since Siphiwe Tshabalala scored this wonder goal at the 2010 World Cup.

It may be 12 years since Siphiwe Tshabalala scored THAT magnificent goal against Mexico in the opening match of the 2010 World Cup but the man himself says it still feels like yesterday.

Tshabalala unleased the venomous strike with his trusted left foot from inside the area and while Óscar Pérez made an attempt to make a save, such was the velocity that the ball flew past the bewildered Mexico goalkeeper and kissed the top right corner of the posts in the 54th minute.

EXIT TALK: PITSO MOSIMANE’S FATE AT AL AHLY TO BE SHARED AT MIDDAY?

FNB stadium erupted into pandemonium as delirious fans greeted the breathtaking goal with a wave of South African flags, loud cheers and vuvuzelas.

“Time flies, but it feels like yesterday and it never gets old,” Tshabalala told www.Safa.net as he reminisced.

“The moment is still on my mind and on many other people’s minds as well. I am just grateful, eternally grateful that I scored probably the most important goal in the history of our football and in the history of the World Cup as well.

“I am just happy that people still celebrate the goal and appreciate it, from players, commentators, you know, everyone, everyone.”

Tshabalala said 11 June 2010 began like any other day and there was little to suggest the events that would play out at FNB Stadium later in the afternoon.

“In the morning I was Okay, everything was normal. But I remember that I received a call from home where I grew up, in Phiri, and they were saying there was a group of people that gathered outside my grandmother’s house the  previous night. They were waiving the national flag, wearing national team regalia and blowing vuvuzelas. It was such a good message as it said they were fully behind me and they wished me well.

“It made me proud to be a South African, and proud to be one of the players that would represent the country in a historic  World Cup on home soil. It really touched me a lot.”

The former Kaizer Chiefs midfielder said he still gets goosebumps when he sees images and visuals of that moment when his left foot connects with the ball inside the area.

“I still get goosebumps. When you have done something and it makes people happy, and it has a positive impact, and 12 years later when you talk about it still gives you goose bumps, it shows the magnitude of that moment. What makes me happy and is more humbling is that it is well received globally.

“I get messages almost every day, from people I do not know, people who appreciate the goal and what I did, and who say how it changed their lives, how it brought them joy and how it made them fall in love with football, from across the world, I mean China, England, Germany, Africa, everywhere……”