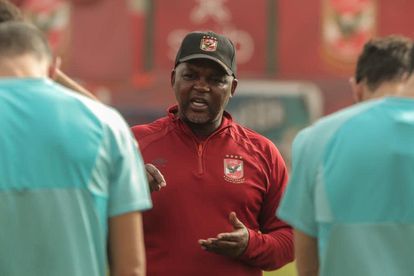 Pitso Mosimane’s team began the match desperate for a win after dropping points in the last two outings thanks to an away defeat at Al Masry and a home draw against Tala’ea El-Gaish.

The Red Devils have been struggling to score goals in recent times, netting just once in their last three league matches.

While Al Ahly dominated the match in terms of possession, they failed to find a breakthrough.

Despite Al Ahly’s best efforts, it was Ceramica Cleoptra who took a shock lead in the 88th minute with what looked to be the match-winner.

Former Zamalek duo Mohamed Ibrahim and Basem Morsy combined before the latter scored with a half-volley.

The match witnessed some late, LATE drama when Al Ahly were awarded a penalty deep into stoppage time after a VAR consultation.

Mohamed Magdy Afsha stepped up and successfully converted from the spot to level the scores and rescue a point for his side.

Mosimane finally ran out of patience with Percy Tau’s goal-scoring drought and dropped the Bafana Bafana star to the bench.

Tau was however called upon for the second half, but again failed to make any impression.

Al Ahly stayed in second place in the standings with their 33 points and trail leaders Zamalek by five points with two matches in hand after 14 games played.

Al Ahly will next be in action at home in the first leg of their CAF Champions League semi-final against ES Setif on Saturday, 7 May at 21:00 (SA time).