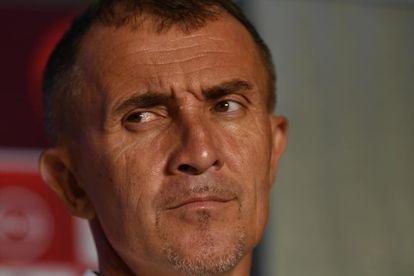 In a statement released on Tuesday, the Federation of Uganda Football Associations (FUFA) said Sredojevic had asked for permission to attend to ‘a private matter in South Africa’.

Micho, as he’s affectionately known, was at the New Brighton Magistrate Court in Gqeberha where he was found guilty of sexual assault.

He was then sentenced to three years in prison; the sentence that was subsequently suspended for a period of five years.

Allegations of sexual assault against Sredojevic first surfaced in December 2020 during the COSAFA Cup tournament in Gqeberha.

READ | AL AHLY’S EL KHATIB: MOSIMANE ONE OF THE 50 BEST COACHES IN THE WORLD!

At the time, a 39-year-old woman accused Sredojevic of twice making sexual advances on her while she was on duty.

The first incident occurred when the woman delivered coffee to Sredojevic and his colleagues – the woman asked if the Serbian wanted his coffee with sugar.

The alleged response from Sredojevic was that he needed ‘another type of sugar’ whilst pointing at the victim’s private parts.

Sredojevic was reported to the lady’s superiors who, in turn, reprimanded him and warned him not to do it again.

However, Sredojevic ignored the warning as he allegedly went on to touch the same woman inappropriately later that day.

Sredojevic was then arrested and released on a R10 000 bail after appearing before the Regional Magistrate Court in Gqeberha.

The Uganda Cranes coach Milutin Sredojevic asked FUFA for permission to attend to a private matter in South Africa.

We have this afternoon received information that the private matter has been concluded for now.

The coach will come back to resume his duties accordingly.