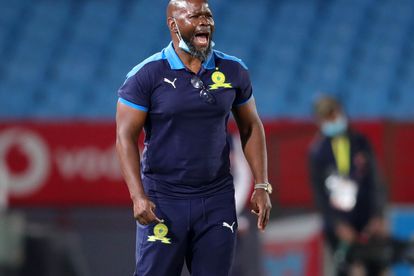 On Wednesday, Sundowns claimed a comprehensive 3-0 win over TS Galaxy to become the first PSL team to reach and surpass the 50-point mark in the DStv Premiership.

It’s really just a matter of time before Sundowns lay claim to the PSL title once again, with The Brazilians consistently proving to be in a class of their own.

After Wednesday’s match, TS Galaxy head coach Sead Ramovic suggested there was nothing classy about the behaviour of Steve Komphela on the sidelines.

“Look, I can understand if emotions are there and everything but there should be a line [you don’t cross], you have to treat people with respect, not only your colleagues and players, you should watch your language,” he said in the post-match press conference in response to iDiski Times.

“For me, if you ask a coach, stand there, and ask the referee all the time that he should give [a player] a second yellow card, I think this is the first thing that wasn’t okay. But okay after that, I was telling him that he should not do it because I think it’s not okay.

“When I told him in a normal way, he started to talk in a really really ugly way, bad language, that I don’t want to say, because it’s really bad – so I think that a coach [at a team] like Sundowns, a beautiful club, should not talk like this to coaching colleagues.

“I think it’s a shame to be a coach of a great club like Sundowns. You represent your club, the way he did it I think it’s not okay – but after the game, it’s everything done.”