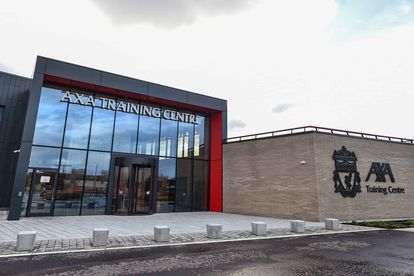 After over 70 years at the historic Melwood Park, it’s out with the old and in with the new for defending English Premier League champions Liverpool FC.

Liverpool FC officially opened the doors today to their epic new training base in Kirkb, a project which took the club over two-years to complete.

The new 9 200sqm training ground will be used by both the Liverpool first-team and the club’s Under-23’s and has been officially named as ‘The AXA Centre’.

Watch: Inside Liverpool’s new state of the art training ground

The AXA Centre worthy of a champion team

“The new development, based in Kirkby, will include three full-size pitches, goalkeeping and warm-up areas, along with two gyms, a sports hall, pool, hydrotherapy complex and specialist sports rehabilitation suites.” – TalkSport reported.

“The complex also has dedicated TV studios, press conference facilities and office accommodation, while the managers’ gallery pays homage to Klopp and other legendary figures in the Liverpool’s history such as Bill Shankly and Bob Paisley.”

Klopp delighted at the final product

“Today is a really special day for Liverpool,” Klopp said.

“It has been a long time coming. There has been a lot of steps, meetings with architects, designers, everybody! It’s an incredible moment for the club.

“The facility is great and whoever has the chance to visit will be impressed. It is a wonderful building, you have everything you need now and for the future. It’s pretty much perfect!”

Jurgen Klopp and his Liverpool side currently await some of their international stars who were away on country duty before facing Leicester City in a crunch Premier League clash on Sunday night.