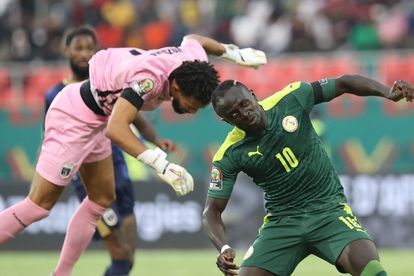 Both sharpshooters will be in quarter-finals action on Sunday in Cameroon with Mane-inspired Senegal tackling surprise last 8 side Equatorial Guinea while Salah and his Egypt team-mates confront Morocco.

Sadio Mane would swap all medals for AFCON gold

Sadio Mane says he would “swap all the medals he has won for a Cup of Nations gold gong” while Mohamed Salah talked of the “desperation of the Egyptian people for another title” after last being champions in 2010.

If they continue winning, twice runners-up Senegal and record seven-time champions Egypt will meet in the February 6 final of the marquee African sporting event.

Below, a look ahead to the quarter-finals with Tunisia, Cameroon, Egypt and Senegal favoured, but shocks are almost inevitable in a tournament where the form book has constantly been mocked.

Five-time champions Cameroon have scored nine goals in four outings – the most of any contender – but the Indomitable Lions are also the only one of the quarter-finalists to concede in every match.

Six of the goals have come from captain and tournament chart-topper Vincent Aboubakar and fellow forward Karl Toko Ekambi has netted the other three, so Gambia know where the main threats will come from.

Debutants Gambia have been the surprise team among the 24 qualifiers, defying being ranked 150th in the world to remain unbeaten and conceding only once, from a penalty.

Musa Barrow from Italian Serie A club Bologna has become an overnight star in Cameroon and Ablie Jallow is another Gambian Cameroon need to shackle.

One of the biggest shocks came last weekend when struggling Tunisia took the lead over previously impressive Nigeria through veteran Youssef Msakni and held on for a 1-0 last-16 triumph.

The Carthage Eagles should be stronger on Saturday as they welcome back head coach Mondher Kebaier and several stars, including captain and forward Wahbi Khazri, who have recovered from coronavirus.

Tunisia have been unpredictable and are the only quarter-finalists to lose twice in Cameroon, but Burkina Faso have been equally hard to judge when winning once, drawing twice and losing once.

The countries have met twice at the last-eight stage with the Stallions winning both and hopes of a ‘hat-trick’ will hinge heavily on how well captain and Aston Villa forward Bertrand Traore performs.

READ | ORLANDO PIRATES AFCON STAR REVEALS HIS FUTURE – WILL HE LEAVE THE BUCS?

This showdown between north African giants stands out as the highlight of the four quarter-finals with Morocco holding a 3-2 lead from previous Cup of Nations tournament clashes.

Egypt showed the defensive solidity the country is famed for when holding a star-studded Ivory Coast attack goalless in the round of 16 before winning on penalties.

Mohamed Salah works tirelessly but has scored only once in Cameroon – the winner against Guinea-Bissau – and the extra shooting practice ordered by coach Carlos Queiroz has yet to deliver dividends.

Sadio Mane says he is “very well” and “what does not kill you makes you stronger” amid concerns that he may have been concussed in a collision with Cape Verde goalkeeper Vozinha in a laboured last-16 win.

Only when the Cape Verdeans were reduced to nine men by two red cards did Senegal score, and they have failed to find the net in two of four matches.

But a defence marshalled by Napoli centre-back Kalidou Koulibaly with Chelsea goalkeeper Edouard Mendy behind him has not conceded a goal – they are the only quarter-finalists to achieve four clean sheets.

Having ended the 35-match unbeaten run of Algeria and upset Mali after a shootout, the Equatoguineans will look to outstanding central defenders Saul Coco and Esteban Obiang to contain Mane.