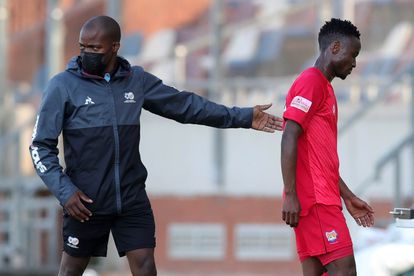 Shozi graduated through the academy at Sundowns and began training with the first team under the direction of Pitso Mosimane and his technical team during the 2015/16 season. He was reported to be missing by concerned family members who have been searching for him far and wide, while numerous members of the football community called for help in finding him this past week.

Mamelodi Sundowns senior coach Steve Komphela posted what was seen to be a positive update over the weekend, saying that “the boy has been found apparently. Hoping indeed he’s okay to receive further intervention to assist him [to] regain his dignity and self-esteem.”

However, it was then stated by Komphela himself and South African broadcaster Robert Marawa that Shozi had NOT been found.

Thankfully in the latest news, Shozi’s brother Simphiwe has confirmed that he is now with Khayelihle and is planning to take him back to KwaZulu-Natal to try and get the JDR Stars player the help he needs.

While stating his relief and gratitude, Simphiwe also hit out at the double standards of others.

“I have got the boy and now we are trying to get him back home,” Simphiwe told MTN FC. “We did a lot of searching and finally he was located and is with us now. I would like to take the opportunity to thank God for protecting me all the way from day one.

“But to all South African soccer players, this is a wake-up call. They must be aware about clubs and agents … they don’t care about them, they only want them when it is time to negotiate their transfers and salaries.

“What we need now is to get him help, but we do not have the means to do this. I am appealing to anybody in South Africa who can assist with getting Khayelihle the help he needs. As a family we are trying to get him home and then we will take it from there. But we are just relieved that he has been found.”

Shozi’s family was said to be fearing the worst after he disappeared a few months ago, which is said to be the second time the 27-year-old has vanished without a word.

Taking to social media, Sundowns coach Rhulani Mokwena was one of those who called for any help in finding the young man: “Please kindly assist if you’ve seen or know of his whereabouts.”

Meanwhile, Teko Modise, who enjoyed an iconic career with Sundowns, Pirates and Bafana, also added his voice to the calls for assistance.

In August last year, Shozi agreed to join GladAfrica Championship side JDR Stars after parting ways with TS Galaxy. Previously, a few loan spells saw him move from Sundowns to SuperSport United, Black Leopards and Richards Bay before the former SA U23 international headed to Galaxy.

“It’s been a while since we last saw him; this thing started in October. He was seen walking with his soccer boots at a mall [in Gauteng]. I got a call from his JDR teammates, and I came to look for him [from KwaZulu Natal]. I struggled to find him,” a family member previously said according to FARpost.

“If I remember well, it was 27 October [2021]. I then went to someone [a traditional healer] in Tembisa, and she asked me to find his t-shirt.

“When I provided her with that, she assured me that he would come home, I went back to KZN on a Tuesday, and he came [to KZN] on Wednesday. He was dirty; he was crying, so I took him to someone to help him. When the situation improved, he stayed four days and disappeared again,” Shozi’s dejected brother, Simphiwe, relates to FARPost.

“He has indicated a few times that he is a bit uncomfortable at JDR. He has said the same to other people,” added Simphiwe.

According to the report, the family was once told that he was living under a bridge, but searches for him have failed to yield any success.

Concern over mental wellbeing of Shozi

According to other reports, there was also a viral voice note on Facebook where the narrator shares concerns around Shozi’s mental state, while suggesting there was a dispute between TS Galaxy and JDR Stars as they both believed he was contracted to them.